Double stud wall systems. Are they still the standard? 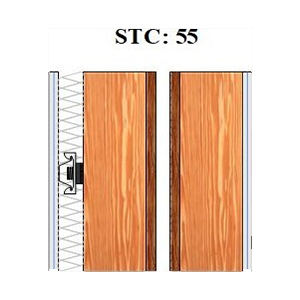 Double-stud partitions are often recommended where high levels of sound isolation are required. These walls achieve their sound isolation because of two main factors: 1) the large air cavity, and 2) the lack of connection between the two sets of studs. While double-stud walls work well acoustically when these two factors are maintained, there are many instances where those factors aren’t or can’t be maintained. That was the case on a recent project where PAC was asked for assistance.

A developer of condominiums was using a double-stud wall between units. Based on a widely used industry reference, the Gypsum Association’s “Fire Resistance and Sound Control Design Manual” (GA Manual), the architect thought the wall’s acoustical performance was well above the code minimum of STC 50. Despite this, the property manager was getting complaints about sound transmission between adjacent units. The building materials supplier for the project suggested that the developer contact PAC International for assistance.

Although the GA Manual shows that a standard double-stud wall should provide good sound isolation between units, the walls actually being constructed differed from those listed in the GA Manual in an important way; they included wood sheathing in the airspace between the two sets of studs. Wood sheathing is often used to provide shear strength in load-bearing walls, but its effect on the acoustical performance of those walls is often overlooked and is not accounted for in many common references like the GA Manual.
The GA Manual lists the rating for a typical double-stud wall (e.g., GA File No. WP 3112) as STC 55 to 59, but when the wood sheathing is included the STC rating is reduced dramatically, to STC 43! This is far below the code minimum of STC 50 and nowhere near the level of sound isolation commonly recommended for condominiums. The degradation in performance is because of the small air cavity formed between the two layers of wood sheathing.

To return the wall to the intended level of performance additional sound isolation is needed. Adding the RSIC-1 to one side of the wall brings the performance up to STC 50. The STC rating can be increased further with additional layers of gypsum board, or by using QuietRock ES instead of Type X. See the image below for examples.

Stay tuned for test data on other assemblies that also solve the issue of shear panels in a wall. The additional test data includes a very interesting example of the effects of the 8-dB rule which is a hot topic currently within ASTM.

Many thanks to PABCO® Gypsum for partnering with PAC on this testing.